Downton is a village of 3,000 plus inhabitants situated on the River Avon, just six miles south of Salisbury, surrounded by lovely countryside. Village amenities include:

There are various options. The hall has seven spaces, including a disabled space, and during the day there is generally ample parking available in The Borough. Hirers may park in the adjacent primary school car park out of school hours (evenings and weekends ) – see Booking Terms and Conditions.  Buying into the refreshment options available from The Goat and The Bull Hotel, which are both nearby, enables hirers to park free of charge in their car parks.

Bus service – the X3 Salisbury to Bournemouth bus service stops outside The Bull Hotel on the A338 from which it is a short walk to the Downton Memorial Centre.
Road links – both Bournemouth and Southampton are little over half an hour away
Railway station – Salisbury is the nearest 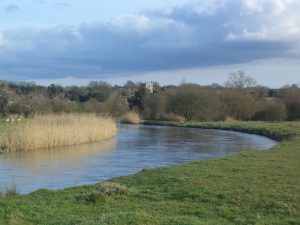 The Downton Memorial Hall was built in 1840, on land donated by the then Lord Radnor, not as a village hall but as a public school for boys.  It became a Public Hall in 1896, when the current primary school in Gravel Close was built, and renamed the Memorial Hall after the Great War.  The two storey new extension, housing the pre-school on the ground floor and two state of the art meeting rooms upstairs, was completed in November 2018.  The whole building was renamed The Downton Memorial Centre.

The primary meeting room is called The Bonvalot Room. This room is dedicated to Second Lieutenant Edward Bonvalot who was fatally wounded in the First World War in 1915.  After the war his mother, Mrs Elizabeth Bonvalot, purchased the land adjacent to the Memorial Hall to create a garden, now the Memorial Gardens, in memory of her son.

The secondary meeting room is called The Centenary Room to commemorate the 100th year anniversary since the end of the Great War; the new extension was opened on the weekend of this anniversary in November 2018.  This room is dedicated to the 44 soldiers and seamen from Downton Parish who fought and died in the war and to all who returned.

The Memorial Centre is owned by Downton Parish Council and leased to The Downton Memorial Centre CIO (Charitable Incorporated Organisation). The latter is a registered Charity, run by a committee of Trustees. Uses of the Memorial Centre, which are many and varied, include art groups, children’s activities, keep fit classes, choirs, business meetings, cinema, stage productions, cookery classes, parties and wedding receptions.